What is Evil Twin Attack?

An evil twin attack is a hack attack in which a hacker sets up a fake Wi-Fi network that looks like a legitimate access point to steal victims’ sensitive details. Most often, the victims of such attacks are ordinary people like you and me.

The attack can be performed as a man-in-the-middle (MITM) attack. The fake Wi-Fi access point is used to eavesdrop on users and steal their login credentials or other sensitive information. Because the hacker owns the equipment being used, the victim will have no idea that the hacker might be intercepting things like bank transactions.

An evil twin access point can also be used in a phishing scam. In this type of attack, victims will connect to the evil twin and will be lured to a phishing site. It will prompt them to enter their sensitive data, such as their login details. These, of course, will be sent straight to the hacker. Once the hacker gets them, they might simply disconnect the victim and show that the server is temporarily unavailable.

How to install requirement’s

Once you install dnsmasq then you need to install hostpad so type this below command on your linux terminal.

First you type this below command on your terminal this command will help you to clone the Fake-AP package.

Once you clone the package change the directory to fakeap so type this below command on your linux terminal.

Step 3: Give the permission

Now you give permission to read write and execute of fakeap.sh bash script so type this below command on your terminal.

Now you just execute this fakeap.sh bash script’s with help of this below command’s

Once you run this tool you can see above three option now you choose which option you want I choose 3 rd option. Once you choose it follow this below image. 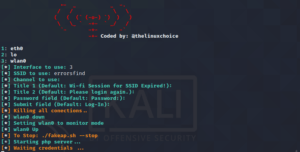 Usage of FakeAP for attacking targets without prior mutual consent is illegal. It’s the end user’s responsibility to obey all applicable local, state and federal laws. Developers assume no liability and are not responsible for any misuse or damage caused by this program