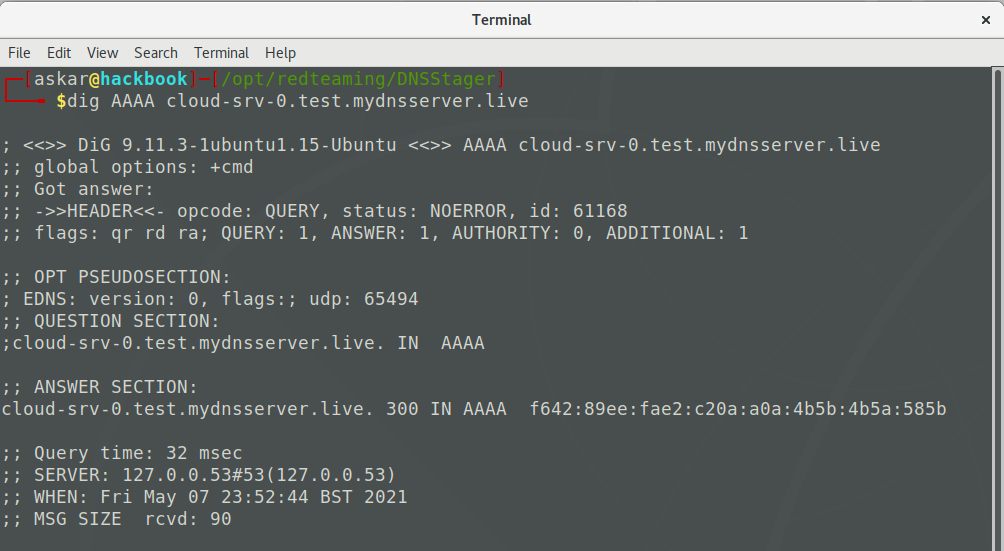 Dnsstager  is one of the powerful Tool this tool will help you to hide your payload using DNS. You can create any payload with this Dnsstager. and this tool should be run on the root.

DNSStager is an open-source project based on Python used to hide and transfer your payload using DNS.

This will create a malicious DNS server that handles DNS requests to your domain and return your payload as a response to specific record requests such as AAAA or TXT records after splitting it into chunks and encoding the payload using different algorithms.

DNSStager can generate a custom agent written in C or GoLang that will resolve a sequence of domains, retrieve the payload, decode it and finally inject it into the memory based on any technique you want.

You can edit the code of the DNSStager agent as you wish, and build it using your own custom execution techniques.

The main goal of using DNSStager is to help red teamers/pentesters to deliver their payloads in the stealthy channels using DNS.

How does it work?

Based on your DNS resolution option, DNSStager will split your payload into chunks and save each chunk of the payload as a response for a subdomain.

For example, if you choose IPV6 as your option to retrieve the payload, the DNS response will be something like:

So, the agent will resolve some domains to retrieve the payload and then decode it and finally inject it into memory.

Currently, DNSStager only supports two records, AAAA and TXT. You can encode your payload using XOR for the AAAA record and by default, it will be encoded as base64 if you choose TXT record.

A best use case for DNSStager is when you need to retrieve your payload through DNS while it’s the only channel available for you to receive data from.

You can use the C or GoLang client to resolve the full payload through DNS and customize the agent to use your own process/memory injection, which means you can fully customize it for your operation and your target.

DNSStager currently supports two DNS records to resolve the full payload which are:

DNSStager has some key features such as:

To get the latest version of DNSStager, make sure to clone it from this repo using the following command

Then you need to install the requirements using the following command

And make sure to install all the previously mentioned requirements too.

After doing all that, you are ready to execute this script as root to get the following

To start using DNSStager, make sure to set up your DNS settings first, you need to make your domain points to the DNSStager instance as an NS record to handle all the DNS requests to your domain.

You can read this full article about how to set up and use.

And you can check the options using the -h switch like the following: